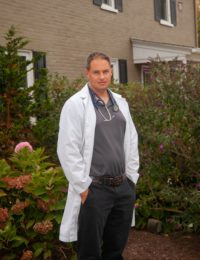 Dr. Johnson received his B.S. in biology and B.A. in psychology from East Carolina University. He earned his D.V.M. from North Carolina State University. Upon completion of his veterinary degree, Dr. Johnson performed a 13 month internship in small animal medicine at the Animal Medical Center in New York City. After his internship, he worked in emergency medicine in Austin, Texas and joined the North Penn Animal Hospital team in 2009.

Dr. Johnson has a special interest in internal medicine, emergency medicine and surgery.

In his free time, Dr. Johnson enjoys attending Phillies and Sixers games, as well as playing city league tennis. He serves as the Leader of the NC State Alumni Association’s Philadelphia Network. Dr. Johnson often travels to New York City to work as an Extra on various television shows and movies.

We are closed every Wednesday from 2-3 pm for a staff meeting. Should you have an emergency, please call our office.